This is a past event. Registration is closed. View other Hong Kong Public Relations Professionals' Association events.

Add this event to any of these calendars

Get directions on Google Maps 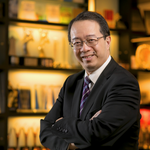 Richard Tsang is the founder of SPRG, a leading PR network in the region and the largest PR consultancy in Hong Kong.

Participating in numerous lectures and a frequent speaker on panels for international forums and seminars as well as judges of major PR and journalism awards, his efforts have been recognized by various circles – he has been honoured with over 24 accolades in recognition of his professional and personal accomplishments, a highlight of which came in the form of the 2012 Asia-Pacific SABRE Awards, during which Richard was presented with an Outstanding Individual Award – becoming the first Chinese winner in the history of the Awards.

Indicative of Richard’s long-standing commitment to help nurture PR talent, he has been a part-time lecturer at the School of Journalism and Communication, The Chinese University of Hong Kong for a quarter century. He is also the Adjunct Professor of The Hang Seng University of Hong Kong. Furthermore, Richard is an advisor to the communication schools of other universities.

Richard is also heavily involved in the community services, holding over 80 board, committee and advisory positions in over 40 business, religious, education, government and non-governmental organisations.